It was a positive month in the market as all size and style segments achieved positive returns. Despite value stocks dominating so far in 2016, growth stocks slightly outperformed in May. There was no clear size preference but the long-term trend still favors large cap and value stocks. 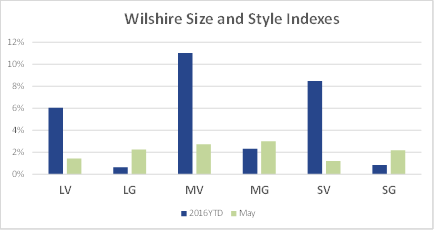 Returns for Tech stocks were robust as the Nasdaq nearly doubled the S&P 500. Healthcare and Financial stocks also did well while no sector was a true laggard.

The market was pricing in a high probability of a June rate hike following the release of the minutes for the Fed’s April meeting but Friday’s disappointing jobs numbers make that unlikely. Historically, stocks perform well after interest rate hikes as hikes are typically in response to a growing economy but the jobs report showed only modest wage growth, low productivity and a drop in the labor participation rate. The Fed clearly wants to begin raising rates sooner than later but will not begin the normalization process until the data support the decision. A July hike is on the table but the market will once again pay close attention to Janet Yellen’s public remarks.