It would be easy to conclude the stock market is having a strong 2017 based on a quick glance at the S&P 500 or Dow but a deeper look reveals the market is not participating in the rally evenly. Of the major size and style segments, only larger growth companies were performing well through the end of May as value and small companies struggled to make significant gains.

Mega-caps led the way as the five biggest names in the S&P 500, all well-known technology companies – Apple, Alphabet (Google), Amazon, Facebook and Microsoft – were up 25% year-to-date. Since the S&P 500 is a cap-weighted index, these five stocks have the most influence of any group of five stocks, comprising between 12% to 13% of the index. The equal weight S&P 500, which gives these companies a combined 1% weight, is more than two percentage points lower than the cap-weighted index on the year. The Russell 2000, a small-cap index, was up just 1.5% through the end of May. Most of the market’s performance is being driven by a small number of firms.

Unsurprisingly, sectors that tend to be comprised of growth companies, like Information Technology, are doing better than sectors that tend to be comprised of value companies, like Energy, Telecoms and Financials. Part of the explanation for these sectors’ struggles is due to specifics within the sector, such as concerns over the price of oil and weakness in banking stocks, but part is predicted by longer-term trends in the style cycle. 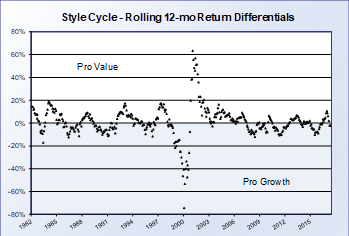 It is human nature to want to overreact to short-term trends but it is important to keep in mind last year favored small-value stocks as Energy, Financials and Telecoms all outperformed Technology stocks. Over the past few days (and right before we published this blog post), the same group of five mega-cap tech stocks that did so well through May are down between 4-6%. The best course of action to achieve investment success is to stay disciplined and trust your long-term investment strategy.

Besides the performance of large-growth stocks, another major storyline in 2017 is the remarkable calmness of the market in the face of growing geopolitical tension, especially in North Korea and the Middle East, the constant threat of terrorism worldwide and populist movements across the developed world, including the US. Jeremy Siegel contends the market favors the Republican agenda rather than the Trump agenda but many, including speakers at the Annual CFA Conference held recently in Philadelphia, are puzzled by this sustained period of low volatility. There is reason to be confident, however, as the US economy continues to lead the way in its expansion. At some point volatility will return and investors should be prepared but for now, volatility is about as low as it can be.