January offered a reprieve from last year’s overwhelming value and small-cap trend as large-caps and growth stocks enjoyed the performance edge. Large-growth logged the most gain at +3%, outgaining large-value stocks by 2.3%. The delta between growth and value was more balanced for mid-sized companies and small-value stocks actually lost ground during the month. The S&P 500 returned 1.9% and the Russell 2000 0.4%. 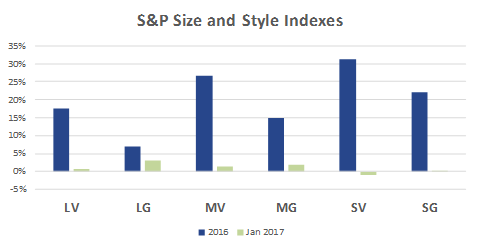 Despite the temporary reversal, the long-term trend still favors small-caps and value stocks. It is very common to see month-to-month changes in size and style trends. Viewing longer-term rolling differentials is more informative. 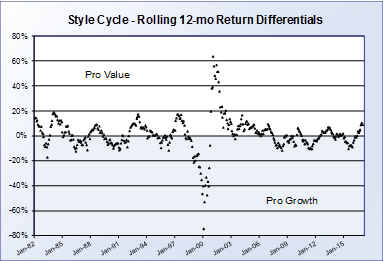 Consumer Discretionary, Information Technology and Materials got off to the strongest start though it is encouraging to see Healthcare stocks rebound following losses in 2016. The top three sectors from last year, Energy, Telecom and Financials, all retreated in January.

In early 2016, amid stock market turmoil and global recession fears, JP Morgan CEO Jamie Dimon loaded up on his company’s stock. The trade proved timely as the stock, which was down 20% at the time, roared back. Unfortunately, many investors were on the other side of that trade, succumbing to the temptation of market timing. Back then the stock market was in them midst of a so-called ‘earnings recession’ that started in late 2015. But even in the ‘earnings recession’s’ early days, Standard & Poor’s predicted that earnings would be muted for a few quarters and would eventually pick up in late 2016. Economic indicators at the time, including the yield curve, never flashed red but many investors still panicked.

Now, in January 2017, Standard & Poor’s prediction is proving accurate as companies are beating estimates and the so-called ‘earnings recession’ appears to be over. It is a reminder long-term investing is hard and requires discipline to avoid getting swept up in short-term panics.  We would not recommend over-concentrating in one position as Dimon did in January but the premise of his actions, investing in stocks while everyone else is selling, heeds the advice of a famous Phillip Fisher quote:

“Doing what everyone else is doing at the moment, and therefore what you have an almost irresistible urge to do, is often the wrong thing to do at all.”