The valuation of the stock market has been a trendy topic for financial blogs and newspapers as market watchers question whether the stock market is overvalued.  There are essentially two schools of thought:  On one hand, Robert Shiller, the Nobel-Laureate economist who correctly predicted the 2001 and 2008 recessions in his book Irrational Exuberance, has been calling the stock market overvalued for years, most recently doubling down in the aftermath of August’s correction.  On the other hand, Jeremy Siegel, the acclaimed “Wizard of Wharton” for his track record forecasting the stock market’s ups and downs, has repeatedly made the case that, considering today’s low interest rates, the stock market is fairly valued.

Close personal friends and respected colleagues, Dr. Siegel and Dr. Shiller’s disparate views on current valuation levels are born from only slight differences in how they measure the market. Siegel’s measure of choice is the PE using trailing 12-month earnings while Shiller’s is a modified PE called CAPE using 10-year average earnings. Due to the longer time horizon, CAPE’s earnings tend to be smoother leading to a more stable valuation measure, especially following times of recession when earnings often deteriorate more than price but pick up quickly afterwards. Stability itself, though, doesn’t make CAPE a good predictor of the market’s movements. As we highlighted previously, CAPE has myriad measurement issues that lead many scholars and practitioners to discredit the model, Jeremy Siegel chief among them.

No matter which PE measure you prefer, a common method to determine the richness of the market is to compare a ratio’s past average to its current reading. We can say that the current readings of both CAPE and PE are above their historical averages and come to the conclusion that the market is overvalued.  Certainly, both PE, at 21.7, and CAPE, at 26, are above their respective all-time historical average.

But choosing the time frame to evaluate averages is an easily overlooked yet important decision. There need to be enough data points to draw conclusions without going so far back in time to bring in extraneous and obsolete variables. Is the economy of 1900 similar to the economy of today? Surely there are structural changes, increased globalization and technological advancements, for example, that make comparisons between 1900 and 2015 problematic. Considering CAPE has called the market overvalued 97% of the time since 1989, it seems reasonable to suggest that the all-time historical average is not the correct benchmark.

Furthering the problem, this obsession with historical averages doesn’t take into account the context of today’s economic environment. Companies are valued through discounted future earnings which are influenced by interest rates. When rates are low, as is the case today, future cash flows are more valuable. This will manifest itself in naturally higher PE ratios.

Another way to look at PE is to flip the ratio to E/P. This is called the equity yield and since 1960, when a clear shift occurred, it has essentially moved in tandem with interest rates. If this relationship continues, the E/P version of both PE and CAPE are actually undervalued given today’s extraordinarily low interest rates. To achieve parity with the 10-year Treasury note, prices would have to rise or earnings fall. 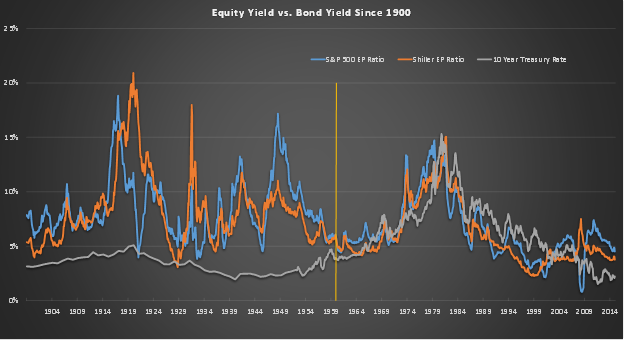 Whether in December or sometime next year, the Federal Reserve is set to begin the process of raising interest rates to more normal levels but this is promised to be a slow process. Interest rates are set to remain below their historical average for the foreseeable future. The equity yield suggests that, despite CAPE and PE’s relatively high valuations, fears of a stock market bubble are over-exaggerated. Even Robert Shiller advises not to unload stocks because “you cannot time [the market].”