The “Trump Bump” continued in December as the S&P 500 advanced 2% and the Russell 2000 advanced 2.8%. Value stocks held the edge over growth stocks while small, mid and large stocks all performed similarly. 2016’s conclusion allows us to take a look back at the year’s trends while also looking ahead to 2017. Value stocks, consistent with our positioning, outperformed Growth stocks for the year across all sized companies while small and mid-cap stocks held a sizeable return advantage over large-caps. Coming off a five-year large-cap biased interval, this likely marks a shift to a period of small-cap outperformance.

The consumer sectors lagged behind most other sectors for the year posting just modest gains. Stocks in the healthcare sector still face increased pricing pressure from legislators, despite the results from the US election, and is the only sector to finish 2016 in the red. Energy rebounded strongly while the Financials, Industrials and Materials sectors surged the last two months amid the perception that the new administration would deregulate and increase infrastructure spending.

We have been advising for some time that elections have little to no long-term effect on the economy, that the direction of the economy before an election continues after an election. The term spread is backing up this prediction signaling little risk of a recession in the short-term, widening in December. As a reminder, this indicator only flashes red when the term spread drops below zero. The healthy spread implies the probability of a recession in the next year is just 4%.

Investors’ attitudes towards stocks since the Financial Crisis can be described at best as cautious and maybe something more along the lines of fearful. This attitude may be changing, however, as the CNN Fear and Greed Index leapt remarkably since the election results, turning from ‘fear’ to ‘extreme greed.’ Certainly, promised tax reform both on the corporate and individual level along with expected deregulation should be beneficial to stocks though the risk of significant uncertainty surrounding the Trump administration should be factored in. Stocks look to be the most attractive of the traditional asset classes for the foreseeable future. 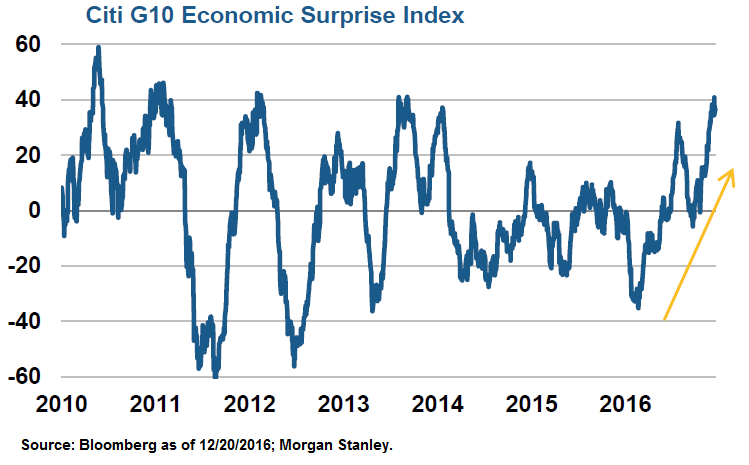 Domestic GDP growth picked up in the third quarter of 2016 and the global economic outlook is brighter.

Much is being made of the stock market’s current valuation but, compared to bonds, stocks are still relatively cheap. The equity risk premium, calculated using the S&P 500’s E/P ratio and the 10-year treasury yield and measuring the excess returns stock holders receive for taking on the added risk of equities, has been consistently positive since the Financial Crisis. At the end of December, it was 2.3%.

It is the case that earnings will have to expand in order for stocks to continue advancing but analysts are optimistic this will be the case. S&P 500 earnings are expected to come in at $130.92 per share in 2017, a $22 increase from 2016. If they are right, the PE ratio of the S&P 500 would fall from 21 to 17 all else equal. If we can break out of secular stagnation in 2017 it should be a rewarding year for investors willing to take reasonable risk for growth and income.