In March, special counsel Robert Mueller subpoenaed the Trump Organization to turn over documents related to Trump’s business interests in Russia. Getting into Trump’s family finances could run afoul of a red line previously drawn by the President, who subsequently assailed Mueller on Twitter and raised speculation that he would fire the special counsel. The FBI’s more recent raid of Trump’s longtime lawyer, Michael Cohen, only increases the intrigue.

For Trump, firing Mueller is equally inconvenient. Republicans hold both the Senate and the House, making impeachment proceedings seemingly unlikely, so it is notable that Republican Senator Lindsey Graham, House Speaker Paul Ryan and Senate Majority Leader Mitch McConnell all warned the President to leave Mueller alone, with Graham ominously stating “it would be the end of President Trump’s presidency.”

While the tweets attacking Mueller stopped in March, the Michael Cohen raid is once again raising speculation that Trump may fire Mueller.

For investors, the question is what impact Washington’s high drama could have on the stock market. A cursory glance at history raises red flags: in the 10-month period from the start of Nixon impeachment proceedings to his resignation, the S&P 500 dropped a stunning 43.5%. 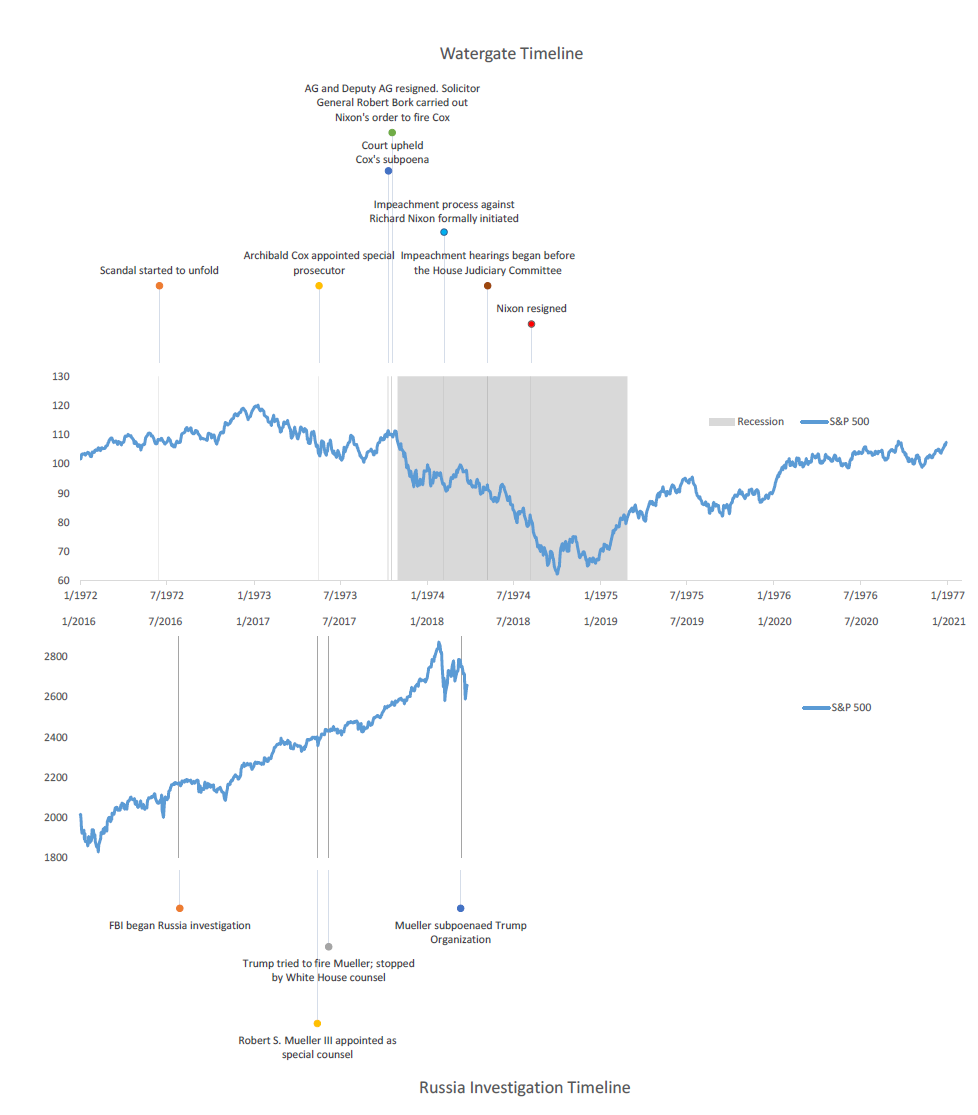 To draw quick conclusions, however, would be naïve as correlation does not necessarily imply causation.

Other impeachments have not seen market declines. When Bill Clinton was impeached on charges of perjury and obstruction of justice, the S&P 500 rose 1.2% and 19.2% over the next 10 months. The Russia investigation of Trump hasn’t had a visible negative on the stock market, either.

The difference between these three cases? The political episode of Nixon’s impeachment was coincident with an economic recession from 1973 to 1975 that saw unemployment, inflation and interest rates in double digits. This period of stagflation was not just a US phenomenon as it impacted seven major economies during the same time. Adding to the woes was the bubble burst of the so-called “Nifty Fifty” high-flying growth stocks in the early 1970s. Absent economic causes, historical presidential shocks barely register with the stock market.

Another reminder to keep your political feelings separate from your investments.