Company President Lowell D. Pratt Jr., CFA shared his thoughts earlier this morning about the market correction and our next steps on the front page of our website and LinkedIn. If you would like to know what we do during market corrections in your portfolio, those posts are great resources. This post will dive into the details underpinning the correction.

1. This correction is about international conditions rather than the US economy.

Explanations for the sell-off include plunging oil prices, slowing Chinese economic growth, company earnings and the chance that the Federal Reserve will begin raising interest rates next month. It is impossible to pinpoint any one reason for the correction and it is likely that each plays some role but the data show that this is more about international weakness and its impact on U.S. company earnings than worries of a rate increase or a U.S. recession.

Through the end of last week, the sectors losing the most ground were Energy and Information Technology. With crude oil plunging below $40 a barrel and IT firms’ reliance on overseas sales – Apple, Intel, Google, Microsoft for example – it is not surprising that these two sectors have fallen the most as global markets plunge.

If this was about the Fed’s September decision about interest rates, we would expect to see opposite movements for Financials, the consumer sectors and Utilities.

2. The correction is indiscriminate.

The silver lining is that this phenomenon creates a short, exploitable opportunity:

The types of stocks that selloff the most during a panic are the same ones that rebound the most vigorously during recoveries.

Our stock selection model works well during normal periods but we transition to a recovery model following distressed market intervals. Higher beta stocks that were the hardest hit during a correction are the stocks that recover the most following a correction. Our stock selection effectiveness is buoyed during these times when we take into account the factors that correlate to stock returns during past recoveries.

Since 1950, there have been 76 trading days that saw worse one day returns. The good news for your portfolio is that the market averages bigger gains in the months following these declines than during normal times. This is why market timing is so dangerous. No one knows when the market will turn around but when it does, it does quickly.

Broken down by year, 2008 had the most of these large down days but even in 2008, only one year later we saw positive returns. The stock market’s resiliency is impressive. 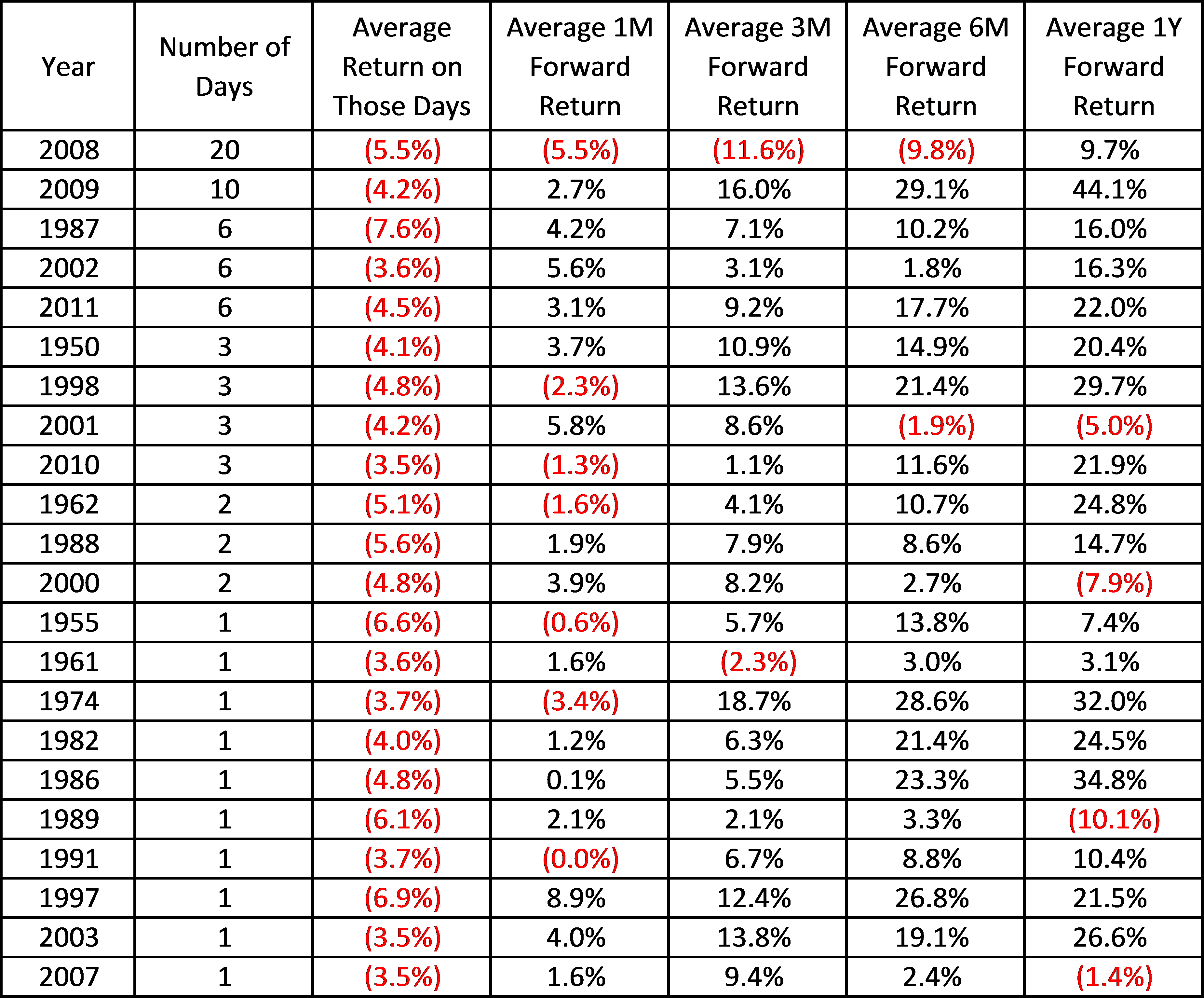 Keep calm and carry on. It remains to be seen how far this correction will go but U.S. economic fundamentals are on solid ground. Back on August 7th, famed Wharton School of Business professor Jeremy Siegel warned that the chance of a correction had increased but also predicted that stocks would escape the impending period of volatility with 4th quarter gains. The first part of his prediction has played out and the second part of his prediction matches our research findings.