Corrections are completely ordinary, healthy market events, yet there seemed to be an outsized negative reaction from investors during the third quarter correction.  Surely, the fact that it had been nearly six years between corrections was a major factor and investors who could not stomach the volatility implicit in equities were chased back to the sidelines.  Still, some market timers see this as an opportunity to go to cash, predicting a bear market on the horizon.  Bear markets don’t pop up out of thin air, though, so we looked for evidence of a recession on the horizon.

These 6 charts show why the U.S. is not heading for a recession.

The Yield Curve is Healthy

The slope of the yield curve, also called the term spread, has been a reliable leading indicator of recessions going back to 1950.  It is known as an inversion when long-term interest rates fall below short-term interest rates.  This inversion has preceded every U.S. recession since 1950 with only one false signal, the credit crunch and slowdown in production in 1967 that was not officially classified as a recession but still saw a 17% drop in the S&P 500 during the following 8 months.  The Term Spread as of September sits at a healthy 2.15, well above the level that would cause alarm.

Fed: The Chance of a Recession is Low

Part of the U.S. Federal Reserve’s mandate is to seek full employment so it pays special attention to any risk the U.S. will fall into a recession.  This chart shows the Fed’s calculation of the percentage chance of a recession through time.  As you can see, when the alarm is raised there is a good chance a recession is imminent.  Today, that chance is just 2.91%. 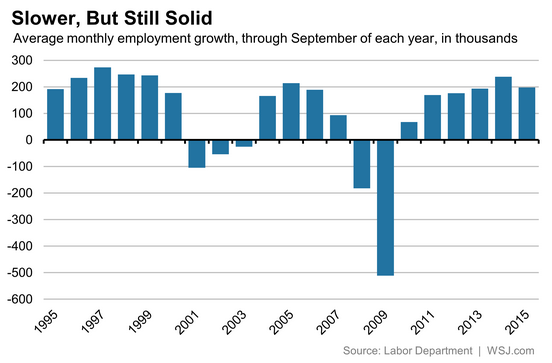 At 8:30 AM the first Friday of every month, the Bureau of Labor Statistics releases its employment report establishing the official level of unemployment in the U.S.  We pay close attention to this report because it is a good indicator of the economy’s health and has direct implications on financial markets as well as Fed monetary policy.  The unemployment rate currently sits at 5.1%, within the range of “full employment”, and jobs have been added every year since 2009.  While we have not seen spectacular jobs growth, U.S. firms are consistently adding jobs, a good sign for the economy.

Volatility Only Spiked in Equity Markets

Volatility in equity markets spiked over global growth concerns and uncertainty surrounding the Federal Reserve’s rate hike decision.  This volatility hasn’t spread to other markets, though.  We would expect volatility to rise across the board in times like 2008-09 but the trend is actually down in global currency and bond markets.

Stocks are Fairly Valued by Shiller’s PE since 1990

Much is made about the Shiller PE ratio being above its historical average and it is true that today’s reading comes in high relative to history.

However, there are considerable issues with the interpretation that equities are overvalued today.  Accounting standards have changed drastically over time making apples-to-apples comparisons with past earnings impossible.  Corporate strategy also shifted in the 2000’s to emphasize share buybacks over dividends.  This shift artificially inflates Shiller’s PE ratio.  A simple way to control for these changes is to look at Shiller’s PE ratio since 1990. Making this adjustement shows that equities are actually fairly valued compared to the average Shiller PE during the past 25 years.